Do You Recall Any Event That You Have Attended That Ended In Disaster?

I can share one memory of an event which was done badly until the organizer has to apologize and refund the money to participants.

This event Energizer Night Race 2011 which was organized in Kuala Lumpur.

Participants were frustrated and the events were cancelled due to logistic planning and communication issue among officials. Here’s the screenshot of the incident that people are talking about and how the grouses raised by the participant.

“Never in my 5-6 years of racing have I seen such a bad organization.”

To top it off, they were not apologetic, rather they were rude and arrogant, blaming the runners for causing chaos and they even having the audacity to yell and shout at the runners, the very people who are funding this event.

I hope that race director (y’all know who I’m talking about) never gets another race gig again.

Energizer had issued an apology here at the media press release here and for a full refund. 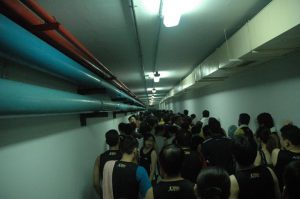 Thousands of runners go through this tunnel without proper air ventilation. That bad.

Here’s one tip to handle a situation as of above. It is so easy to get all caught up on the planning that you tend to get a little carried over and may at times go overboard.

Start from the “the Date” and plan backwards.

In this manner, you can avoid the same situation occurs as above.

To ensure proper planning, you will need to use event management system such as Evenesis that helps you to plan your event to ensure above disaster does not happen.