Whenever I have to stand around waiting on other people, I get to thinking there has to be a better way. I did just that as I stood in a long queue waiting to have my moment at the registration counter. I watched the painstakingly slow progress being made and wondered why I could get through a longer queue at the supermarket faster, when each person in line had to have purchases tallied and then pay for them.

I got to the point where I was directly behind a group of three attendees who were obviously together. Any momentary exhilaration I felt at being next in line was dashed quickly. The perplexed lady at the registration counter seemed to be having a problem as she searched for a participant’s name on a sheet of paper. I overheard reference to a lost ticket, so assumed referring to the list was the inefficient way the planners of this event chose to track who’s registered and who’s not. One of the three was explaining that he was booked into a room in the hotel the event was in, along with his colleagues who had tickets, so obviously he was also booked to attend the event.

I thought his suggestion that he’d pay to attend now and sort it out the following day was logical. Unfortunately, logic isn’t always enough. Apparently the gal at the registration counter did not have an up to the minute count of the tickets already sold so had no idea if the event had any available seats. I asked if it was possible that I queue jump because I desperately needed to use the washroom. It wasn’t, but I could see the group ahead of me continuing on with their adventure far longer than my patience was going to last.

Once inside I reflected on the fiasco that was still going on at the entrance. Why did the event organizers not have a real time count of attendees? Why was there no means to electronically access a real time database to confirm the validity of a lost ticket claim? For that matter, why were tickets being checked against a paper list at all? Scanned for a barcode or QR code would have been much faster, more accurate and could have automatically noted the attendee had registered. My elderly parents used paper lists back in their day, but they had no other option.

In stark contrast to this event, a previous one I attended used hand held bar code scanners. Plus guest were asked to be seated, rather than stand in line. It was a dinner type of event, and once everyone was seated someone with the event organizers went to each table and scanned tickets. The difference in mood between event attendees made to queue to register, in comparison to those seated immediately and then confirmed was like night and day.

There were issues at the more organized event, as there almost always are. However with that event, the organizers were able to quickly search for information relating to the guest and check him or her in using the mobile devices, and do so right there at the table.

Back at the office, I visited the backroom folks whose responsibility was to organize our own events. I wanted to know if we were organized or disorganized event hosts. It turned out we were using Evenesis, an online event management system, and that we too used mobile scanners to read barcodes and QR codes. I was pleased that it was our policy to use technologies to be as efficient as possible to avoid delays and any inconvenience to attendees.

I was even more please to find out that although Evenesis may appear more costly on the surface, the saving in time and avoidance of errors actually made it far less expensive that the labor intense, manual method of processing and tracking attendance. An added plus is that staff working on the same event were able to log in and update files in real time, so anyone logging in later knew exactly where everything was at. I asked then if there was a significant up front cost to use Evenesis, assuming there was and that was why the last event I attended was sticking with lists on paper and manual registrations. When I was told Evenesis is a pay as you go online system/program, I was bewildered. Why wouldn’t an event planner use such a useful tool? 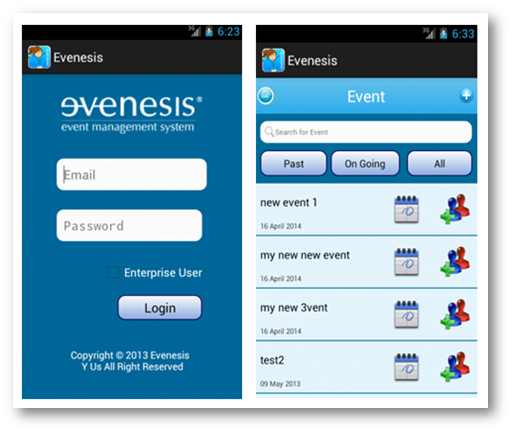